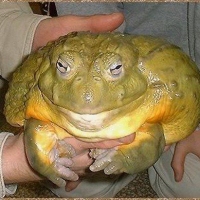 Frog Member, Alpha One, Adventurer
June 2021 in General Discussion
What is Frognar? Frognar is just Tulnar but you would have the option to make your character look like a frog/toad humanoid. It would have the same racial stats as a Tulnar and everything. In short Frognar is just a customization option for Tulnar.

Why Frognar? Because a lot of people in the ashes of creation wanted Frognar into the game. And that's simply because everyone has a different fantasy of what they want to be in ashes of creation, some want to be dwarves,elves,cat girls etc. A good amount of people want to be a Frog Humanoid in ashes of creation and that's why I think it should be added into the game. Because the demand for it is there. Another reason would be because no MMORPG has a option to be a Frog Humanoid. This will help ashes stand apart, while it is a small thing this will be big because you are giving the players so much freedom to live out their fantasy as Frognar. Like I said before there is no other MMORPG that lets you be a Frog Humanoid, so all these mmorpg fans who wanted this will flock over to ashes maybe just to try it out because you can be a humanoid frog. And then they stay because it will be such a good game.

The Fantasy of Frognar. The Fantasy for most Frognar players would be living in the under realm by a lake in there. And when ashes comes out all the Tulnar are rushing out of the under realm to explore the world, and so will Frognar. You go out and explore, but you still live around a node by the lake. Or a freehold in the swamp, you just love such areas because you like to eat the insects there and fish. And ocasionally eat your fellow frognar because only the strongest frog can survive. And with this mindset, you venture even further than your lake, you want to be the strongest frog and you cna only achieve that by adventuring forth. Maybe even one day run a inn as a Frognar, sell frognar leg soup. You'll be known as the frog that owns his/her own inn!

This is only my fantasy but many other Frognar players have other fantasys they want to live out in the amazing ashes of creation world.

What Frog would Frognar be modeled after? Well Obviously depending on how much work they put into the Frognar options it could very well be multiple. But what most Frognar players imagine it being modeled after, it would be the african bullfrog or tree frog. These beings have the face of a frognar and the thrive of a frognar (see picture below) I would dimagine we would have the face of the african bullfrog, the legs too. Not too sure on how they would put in arms tho. I'll post 3 pictures so you can see the OG African Bullfrog annd OG tree frog and then what a possible concept could be. (not my art)