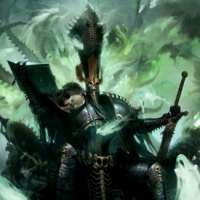 
As the new items came out today, I wanted to look up the lore behind them like I always do, but you will have to imagine the shock when I read the new lore. It felt like I was reading the lore for the wood elves from Warhammer fantasy. Now I bet you think I'm just over exaggerating, and so did my friends until I showed them the comparison,


"No creatures in all the grove are so revered as the Stag of the Boughs. Rarely seen, it is believed by the Empyreans to be an avatar of the forest's will made manifest, and as such harbors great power. Very few in the Empyrean's spanning history has a Stag of the Boughs let one ride them into battle, only those great warriors ready to give body and soul to preserving the wood and their people." - STAG OF THE BOUGHS (ashes)

"No beast in all of Athel Loren is treasured more than the Great Stag, a creature that the Wood Elves revere as representing the true soul of the forest. Wherever the truth of their nature lies, the Great Stags are unquestionably magical creatures, though they are undoubtedly of a nobler cast than Unicorns. They ride not mortal mounts, but Steeds of Kurnous — manifest aspects of the hunt that are as tireless and determined as the Elves who they bear into battle. Only the bravest or most foolhardy individuals remain abroad when the horns of the Wild Riders are heard upon the breeze, for their otherworldly tones invoke the fear of the prey in all who hear them. Such an instinct is well-founded, for there is no mercy to be had from the Wild Riders once the hunt has begun. Those unlucky enough to be caught in their path are ridden down without mercy, their deaths a sacrifice to the timeless splendour of the King in the Woods" - great stags (Warhammer)

As you can see these two have a lot in common


"Felling trees in the grove would be tantamount to murder, yet every so often the forest will grant a bounty of its titanbark to the Empyreans as a sign of thanks for their duty as protectors. This bark is then ground down and hammered in a red hot forge, creating a metal that is highly resilient yet far lighter than one would expect. This mail is granted to the protectors of the grove, who stand motionless yet poised, ever diligent of any assailants." - TITANBARK MAIL (ashes)

"Waywatchers are silent sentinels, the guardians of the paths leading into Athel Loren. They are masters of concealment, and can lie unmoving and unnoticed for days on end before springing an ambush on a startled and unfortunate prey." -Waywatchers (Warhammer)

This link was more about the warriors themselves than the armour, but you get my point


"Within the farthest corner of the Groves of the Slumbering Shade lies the Altar of the Venerated. A testament to the enduring nature of life itself, countless Empyrean pilgrims come to pray under the ever-watchful gaze of the grove's protectors, giving thanks to the shelter and prosperity that the wood's power helps to maintain. The altar is indescribably ancient, constructed by the Empyreans of eld. So long as it stands, it serves as a beacon of hope to the nation, and to many of those without." ALTAR OF THE VENERATED (ashes)

The Gaen Vale itself is a beautiful, high-sided valley of wild flowers, apple trees, and fresh mountain springs.[2a] The landscape spreads out in a rolling patchwork of bountiful forests, fast-flowing rivers, and wide groves of graceful statues and temples of purest white. Music fills the air, not the tunes of Elvenfolk, but the melodies of the earth: birdsong, the rustle of wind in the branches of tall trees, and the gurgling of life-giving waters flowing from a rocky peak at the island's centre. Together the sounds form a natural orchestra that plays the symphony of creation with every breath. If one is welcomed by the oracle, an Elf-maid armed with a moon-coloured bow will appear and guide supplicants into the valley below.[2c]

Unicorns, pegasi and griffons roam freely within the vale, unafraid of passersby. Indeed, the deeper one journeys in, the more of its fay inhabitants can be found. Dancers and archers who practice their arts within groves of glorious splendor. White marble temples sit within overgrown arbours, priestesses of Isha pouring wine and honey on the sacred places as they given praise to the fertility of the land. Kneeling maidens receive instructions from the island's inhabitants.
The Gaen Vale (warhammer)

and this is also the same


I may be overthinking this way too much but its not the first time intrepid has done somthing like this so I want your honst view, am I being to critical or im I right?

The dead do not squabble as this land’s rulers do. The dead have no desires, petty jealousies or ambitions. A world of the dead is a world at peace
4