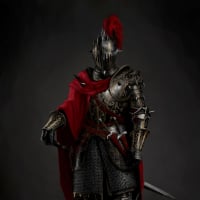 Damokles Member, Alpha One, Adventurer
October 2019 edited October 2019 in General Discussion
Hello everybody,
Damokles here once again with another topic!

Class abilities and gameplay, we have seen some of them in APOC and some of the MMORPG gameplay videos, but what abilities would you like to see?

Please remember, that balancing is a thing and try to think of Cooldowns for your abilities. ;D


Here are some of mine, most will be for the bard, because that is what i will most likely main (Maybe a rogue too, but I will have to see wont I?

Bard:
Illustrous Lunge - The Bard lunges at his target for 3m and deals damage if hit. If the bard hits his target, all allies in a 10m radius will be inspired and recieve a movementspeed increase for 5sec. CD: 20sec

Ferocious Cleave - The bard cleaves his target for x amount of damage and inflicts one stack of bleed. All enemies surrounding the target will have slightly reduced attackspeed for 3sec. CD: 10sec

Heroic Tale - The Bard tells of heroic spirits and the adventures of their ancestors, inspiring their surrounding allies. All allies in a 20m radius around the bard will recieve an increase in movementspeed, attackspeed and castspeed for as long as the Bard channels the ability and 3sec after the cast is broken. Channel - 10sec CD: 2min

Way of the Troubadour (Passive) - The Bard is following the tradition of his mentor and their mentors. The Bard cant be slowed below 70% of their normal movementspeed.

Way of the Trickster (Passive) - The bard is as illusive as their mirages. The Bard has increased dodgechance by 10%.

Illusory Blades (Trickster) - The bard throws invisible blades around himself, inflicting a bleed effect and slow on all enemies in a 3m radius around him. CD: 15sec