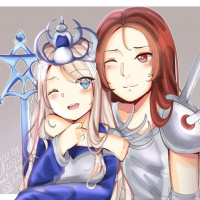 zabild Member
March 2020 in General Discussion
What are your thoughts on boss's with personality?

My thought are as follow I think boss's with personality would be a unique thing and would make people look more into the backgrounds or lore of the boss or area they are going to,
for example there is a sword's master who's goal it is to prove he is the strongest or most skillful with the sword so if u fought him as a group and someone had a sword they are more than likely to have his aggro and throw in a few voice lines to emphasis why he is after them, or a bandit chief has been ransackin villages or caravans and is going to resell his spoils for profit if you are there to recover the stolen goods you can go ahead and start recovering the goods during the fight and you would get his aggro, you could implement this with monsters as well i.e. you attack a monster's spawn/children/eggs...etc. you would gain its aggro and it would perhaps even go into a beserk mode dealing additional damage.
I feel like this can be implemented outside of combat as well via giving gifts to people in order to gain their favor and based on that you could get different dialogue when interacting with them I think this should be special and not everyone could do it reserving this special dialogue for other players to hear around them but is reserved for that special player i.e. you save a bartender's daughter he gives you a discount of like 2% or less and makes comments about how the saviour is back or just thanking him, I think it would be cool to be able to build relationships with NPCs even monsters to an extent for example you save a wounded wolf cub and release it into the wild later it grows up and its pack is friendly to you or gives u the chance or paying them homage via food or something in order to gain safe passage through their territory stuff like that if the mocs remembered the actions of players and interacted with them accordingly would be interesting i.e. if a players actions or response are blunt/disrespectful when receiving quest that NBC and their associates are less likely to bother them with task unless in more dire circumstances or of a player is know for taking more killing quest and word get around the village they would be more likely to receive killing quest rather than gathering/exploring diplomacy quest from that npc what are your thoughts on this? I may have diverged away from the original topic but I think it all pertains to the same subject
0