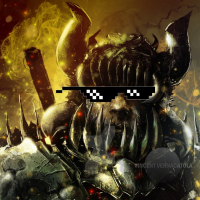 Sarevok Member
April 6 in General Discussion
As most tanks know blocking currently right now is a passive ability. With the idea of action combat being talked about I wonder if Jeffrey Bard has considered changing blocking to an active ability instead.

Would you prefer active blocking and evading or passive?
Looking for a future PvP guild in AoC? Want to learn from vets and git-gud? Check us out at http://www.fml-guild.com/