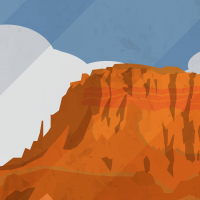 I recently shared a post talking about what I hope to see for city design in Ashes. Since then, I thought it would be fun to do some practice and spend some time putting together a sample layout for an economic Vek metropolis that highlights what many of those ideas might look like in practice. As mentioned in the other post, this is just about the layout, adjacencies, massing, and sightlines within the city. It will be quickly apparent that it is unfinished – a ‘finished’ city would include proper building assets, ground textures, a variety of doodads and plants, and so on. Nonetheless, you should be able to glean what it feels like to occupy the city, as well as comprehending the layout and vistas from this simple whitebox model, and I hope it helps to illustrate some of my thoughts.

My spatial diagram and the published Vek mood/concept board

The Vek are stargazing orcs with a distinctly Mesoamerican aesthetic. Other than that, there are only a handful of revealed concept and mood images, which I did my best to include references towards in my early assembly. When I assigned potential special typologies to each of the race and subraces, I gave the Vek a linear type called the ‘Celestial Promenade,’ in reference to the breadth of Mesoamerican cultures – such as the linear layout of Teotihuacan and urban planning derived from the positions of the sun and moon(s.)

While I hold that adherence to unique site conditions remains the source of greatest potential for city memorability, I wanted to use this project to illustrate an archetypical manifestation of a racial spatial typology. So, what does a linear spatial typology mean? A key component of MMO cities is the inclusion of a major central space. Inside this space, the primary functions of the city are grouped together and players have a place to meet or stand around looking cool. A linear typology, then, takes this central space and stretches it out, such that the primary means of interfacing with the city involve moving along that line. 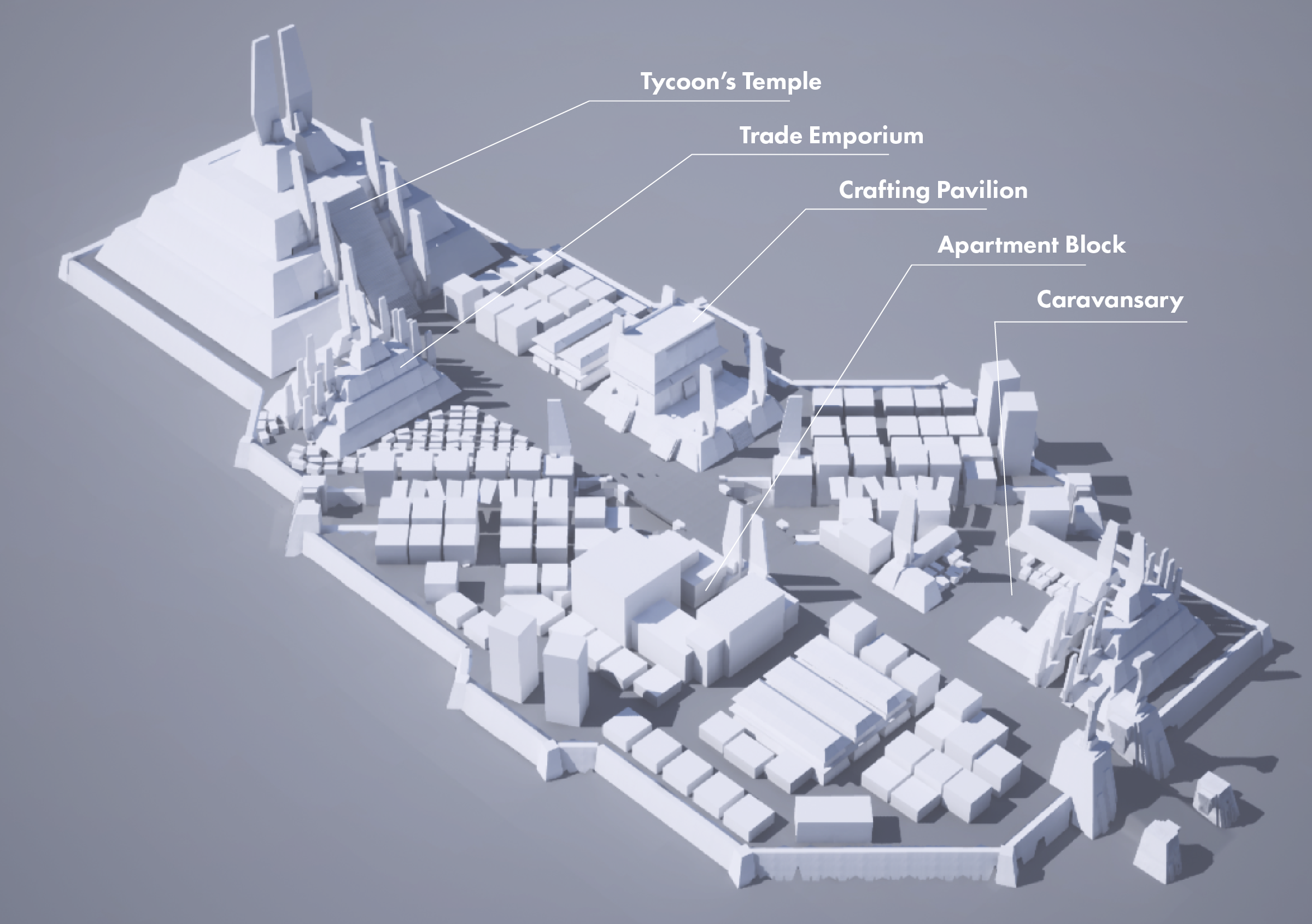 An overview of the entire Celestial Promenade

While we don’t know a whole lot of specifics about the unique buildings inside cities, we can speculate a little based on what do have. Economic nodes definitely have an emporium (~auction house) and a market. We also know that cities are the places in which specialized crafting stations can be found. Player housing (other than freeholds) is found in cities. Player storage seems to be based on placing chests in one’s home, instanced in an apartment or otherwise. Caravans depart from and arrive at cities.

With all that in mind, I arranged each of the key buildings along the line with special attention paid to adjacency and proximity. Imagining the metropolis as a place where goods arrive, are placed in storage, processed into items, and ultimately sold, you can trace the flow of goods across the city away from the main gate. What I think will be the most well trafficked buildings – storage and specialized crafting – are placed in the city center, allowing easy access to player owned buildings, city exits, and the emporium.

In a typical city visit, players should take care of business in one point of interest, depart back into the center promenade, run along the length of the promenade, enter another point of interest, and so on. This keeps the traffic and city activity flowing along the line, ensuring the unique spatial characteristic desired in Vek cities in contrast to those of other types.
In the middle of the city, a bridge allows the two major paths to intersect without directly crossing. This bridge creates a hierarchy between the two paths and adds another landmark central to the points of player interaction. ‘Meet me on the bridge to trade’ should be a common exchange here.

The growth from the center line of player owned buildings, roughly 20 per stage

A unique facet of designing cities in Ashes is the high degree of player agency. With the vast majority of buildings being player owned, it is not possible to guarantee where the hot spots or shops are. In one iteration, a particularly charismatic player might open their tavern in an out-of-the-way part of the city, warping the way players interact with their environment. Nonetheless, we can proceed with some pretty safe guesses based on proximity to lanes of travel and key city services.

As the city grows, more buildings are added on and can be purchased. We have heard that the way the node system will work is such that people that move into the city early will have their property grow in size and prestige as the city grows. So, the city will grow incrementally, with more space opening up in each stage. The largest and theoretically most well trafficked buildings will be adjacent the center path, becoming smaller, more out of the way, and more spaced out in later tiers.

Along the dominant center path, the buildings all fall into a crisp line punctuated by the presence of the points of interest – drawing players to move and function along the line.

Looking down the promenade from the stairs of the Tycoon's Temple

In this version, the city wall is represented by an earthen berm. While there are examples of traditional walls to be found in Mesoamerican cities, the more enduring image of the typology is that of embankments, and so that is what I used here. You can imagine that, in a siege, rather than knocking down the walls you might instead damage them to the point where they can be scaled. Functionally very similar, thought the city would still certainly operate if traditional walls wind up a necessity.

In addition to the unique atmosphere in each district, there are a number of tall landmarks visible from throughout the city that help to convey scale and keep players from getting too lost. These landmarks are a mixture of large points of interest and monuments related to the movements of the sun and moons. The unornamented masses are all placed in such a way to channel visibility towards these landmarks when players take the time to look upwards or outward.

The rest of the time, while staring at the floor, the players make use of the different regions in the city which have distinct characters. The variety present in the zones furthers the message of diversity and 'grandness' while also giving more atmospheric clues to location and navigation.

Looking over the market and emporium from the crafting pavilion

I paid careful attention to scale throughout the project:

Looking down merchant row towards the north solstice gate

The player owned and managed nature of the urban environment in Ashes means that nearly every building will have some sort of definite function. While this means there cannot be 'empty' buildings suitable for roleplay, there are still plenty of opportunities to hide off-the-beaten-path corners and nooks, 'secret' paths, and other such small rewards for taking the time to explore.

A small garden tucked in the space behind some buildings

We have heard that (at least in some ZOIs) a season will last a week of real time, with an in game year taking 4 real weeks. This means, then, that we could have one day per real week dedicated to the solar events in Verra - the equinoxes and solstices. I'm not sure how much variation in the path of the sun is planned or possible with the way the advancement of time will be done, but it could be a really interesting thing to plan around - especially is the Vek (or magic users in general) derive some sort of benefit...

The Tycoon's Temple at sunset on the Equinox

The image I made for the header is based on Mayan Codices, with some extra fantasy flair.

You can find the Vek concept art and everything else known about them (which is not a ton) on the wiki.

If you want an introduction the the relationships between the skies and real ruins, I highly recommend this guide.

You may have noticed the two Moon tower sets on opposite sides of the city - we do know that Verra has multiple moons, and I thought it might be interesting to have one going 'backwards' across the sky - the same thing occurs on Mars.

While I based the shapes of most of the key buildings on the limited concept art, the apartment block's shape is roughly drawn from the real findings of apartments at Teotihuacan.
3