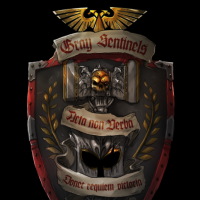 We allow non Gray Sentinels members to join in on a case by case basis. The idea is these people would come is as a sort of private contractor, adviser, or mercenary for the quests.

The one shots and short campaigns are designed to give a place for people to get immersed in the wonderful world that Steven made. Of course many things will have to be reworked and adapted as new lore comes out but in our wait for the release of Ashes we would like to tell the stories of our ancestors set in an ancient and mystical land that is all but myth to our modern characters just returning through the gates.

How the campaign works:

Using DND 5E.
Sessions can last anywhere from 2 hours- 6+ hours depending on the DM and the party.
Sessions might have a multi day campaign but will not last for weeks at a time because of how our rotating DM system works.


Players start at level 3 and as milestones occur across the campaigns all players will move up in rank so they can combat more difficult threats. How we explain this is that the adventuring groups are becoming more well known so they go from hunting down some rogue bandits to eventually fighting in wars, uncovering major plots of corruption, and even hunting dragons.

We have rotating DMs so after a one shot or short campaign is over a new DM will start a new story aka quests. This allows for many different players to get involved with various stories as well as avoiding DM burnout as they do not have to tie up their schedules or always DM as they have the opportunity to attend others campaigns.

All of the campaigns are set in the same timeline and build off of one another to create a large connected world where the actions of one party impact the future quests, NPC interactions, and plots of future parties.

To respect the fact that we will be restricted to the 9 playable races in the game we are restricting players to making Humans, Dwarves, Orcs, Elves, and their half breeds. Other races are on a case by case basis as the are lesser races in Ashes but we want to maintain respect to the future breeds.

These campaigns are for fun and to create stories, it should not be about becoming Over Powered or "beating" the DM. We want to tell stories and get immersed in the world instead of just abusing mechanics of DND.

If you are interested in joining in please reach out to me in DMs!