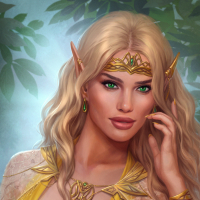 The soft rusted haze of the setting sun was just disappearing over the western ridge as the ceremony began. The Empyrean woman that stood before the crowd was lavishly covered in a gold and emerald studded gown that hung delicately about her features.

It was her first time leading her people through the rites therefore she had been preparing all summer for this moment. Her sister, Sebaya, had been given the honor the year prior and she was determined not to be perceived as inferior. The harvest had been most plentiful this season and it could be seen in her people’s faces as they turned their gazes up at her.

Celemirion spread her arms wide as her chanting began to fill the halls of the open-air temple in a sweet, almost melodic rhyme. The ornate thuribles that lined the pews had created swirls of brilliant purple smoke that drifted high in the air to the upper reaches of the sanctum. An earthy aroma dispersed on the cool breeze as the elven priestess began to speak.

“Rejoice and welcome!” Celemirion’s voice rang out over the throng of elves, those in finery seated in the front whilst the rabble clung to the lofty pillars that held up their sanctuary.

“Another successful reaping has ensured prosperity and security for House Indrathil over the brutality of the coming months. What is more - the Oracle has foreseen the opening of the Divine Gateways upon the spring! With faith, this will be our last winter before our eyes may yet again glimpse the majesty of Verra!”

The prophesied awakening of the Divine Gateways had long been utilized by various priests and religious figures throughout the kingdoms of Sanctus, salvation - the return to their ancestral home and the birthright of the Pyrian Empire that came with it. The Essence.

Rumors abound that not only had the Empyrean Oracles prognosticated the impending odyssey, but the Shamans of the Py’rai had as well. Similar accounts stemming from the religious sects of human and dwarven nations had also reached the ears of the elves. In hopes of establishing the first predominant colony home to explorers; Celemirion’s father had aligned their house with the Gray Sentinels, their goals shared.

Mumbles spread throughout the mass, those few seated relaying a skeptical glower while the majority who stood broke out in an exuberant fervor.

On either side of the platform beneath the altar that stood before Celemirion lie a smoldering pit sitting upon a shrine to the Goddess of Creation, within were the husks of wild boar intended to be strewn over their now empty fields as a sacrifice symbolizing rebirth; ensuring a copious crop for the next season. Surrounding the pits were offerings of bread, coin, and wine.

Striding down the steps Celemirion would join her father, mother, and elder sister. The noble family traditionally stood on the platform to oversee the ceremony however for the first time Celemiron would stand at the center.

Pride and accomplishment filled the young Empyrean maiden’s heart but before she could resume her homily out of the corner of her eye a glint of light would distract her vision.

From its sheath a ceremonial dagger had been drawn, wielded by a hooded figure and concealed in the shadows of an adjacent pillar. The flames from the many braziers surrounding her would reflect upon it’s blade, revealing the nefarious attempt.

“Assassin!” Celemirion bellowed, calling out to the guards.

As she spoke the infiltrator would lunge from his position “The Essence will lead us to destruction! Only corruption will follow in our wake!” he called out in desperation to the crowd.

Before he could make it another step toward the dais the sentries were upon him, forcing him to his knees and restraining him with bindings. As Celemirion would look on, her father would turn to fix his gaze upon her.

Within a moment of the silent exchange she knew what she must do.

“Bring him before the altar!” Celemirion commanded. Without hesitation the order would be carried out.

“In front of us stands one who would deny us our birthright. One who would keep us in the shadows. Away from the embrace of The Seven.”

“We must cull the faithless from our ranks. Place him into one of the pits.”

As the malefactor wailed the parishioners below would break out in an impassioned uproar; Celemirion lifted her hands to the heavens and gave thanks to her Goddess as the moon ushered in the stars.