The Scion of the Echoes

The girl with the violet eyes.

She was about 14 or so, maybe younger.

“Is it really okay for you to be here… with me?” I asked.

“I don’t see why not.” she replied, with absent minded childlike innocence.

“Alone, a young girl.  An older guy, like me.”  I struggled to find a way to put it that wouldn’t make me seem like any more of a creeper than I already felt, “People might talk.”

“What sort of people?” asked the girl.

“Well, you know… people.” I attempted to elaborate, with limited success.  “They’ll notice you together with me, and think I’m up to something.  I could get in real big trouble.”

I blinked at her dumbly.

“You have purple eyes.” I stated, in as even a tone as I could muster.

“Do I?” the girl replied, absently.  She peeked around me at the dusty broken mirror that, despite its best efforts, still hung on the wall. 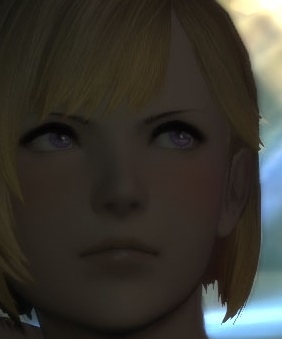 “You have purple eyes”, I echoed, “and you don’t even realize it?”

What was this girl doing in my neighbourhood, let alone in my room?

Her brightly colored outfit, blonde hair and purple eyes made her stick out like a sore thumb, particularly next to me in my dirty old shirt and trousers, my stump arm and one good hand.  The slum I lived in was crumbling.  The room that I called home was just two walls and half a ceiling in a decrepit building that was barely standing.

The girl had stopped looking at the mirror. She was staring off into space now, and didn’t seem to have heard me.

“You have purple eyes?” I repeated, for emphasis. I think this time it came out as more of a question.

This girl was as random with conversation as she was with her sudden appearance.

“Oh,” she said, rather glumly, I felt.  “Well, you’ll probably want to get moving then.”

The girl looked directly at me then, and I swear it felt like those violet eyes were looking right through me.

“Run.” Her voice, rather than conveying urgency, conveyed a sort of certainty.

I was about to respond when something whizzed past my face leaving a burning sensation against my cheek.  Whatever it was impacted wall behind me, shattering a portion of it in a cloud of dust.

I ran.  I could hear voices, several of them, angry violent sounding men.

The girl, faster than she looked, seemed easily able to keep pace with me.

As we ran, I glanced at her… well, more like glared at her. “What the hell is going on?” I demanded.

The girl blinked at me several times, as though I had just asked a very stupid question. “Well…” she said, seeming to have trouble finding her words “I’d say some folks are trying to kill you.”

“What?!” I blurted, as if that part wasn’t already completely obvious, “Why does anyone want to hurt me? I’m nobody!”

The girl nodded in agreement, “Yep,” she said, “That’s about the size of it.”

She tugged my good arm pulling me into a narrow alleyway that I hadn’t noticed. “This way,” she said.

We crouched behind some broken boxes and I could see the outline of several individuals running by the alley.  Each one seemed to be wearing dark clothing, and I couldn’t make out any features, anything to recognize them by.

We remained still for a few minutes, and the sounds of our pursuers faded.  At some point, it occurred to me that my young companion seemed to know of this danger before it arrived.

I turned to her, and with my one hand grabbed her by the shoulders and shook her, “Did you lead those people to me? You almost got me killed!”

Seemingly unaffected by my jostling, the girl cracked a smile, “You can call me Arkey, if you like.”

I let go of her. What was I doing, shaking a young girl? A girl with purple eyes…

“Arkey,” I paused to catch my breath, “Forgive me if I seem rude, but Who the Hell are you?!”

“You aren’t very well informed are you?” spoke the girl, tilting her head to the side.  She seemed disappointed, but only for a moment, “Honestly, you lot never are.  It’s okay, we make do.  Let me try again.”

The girl stuck out her hand ready to shake mine, “You may call me Arkey. I’m a… messenger? No no… what’s that other word you use… Envoy! I’m an envoy!  You might say I’m THE envoy.”

The girl wasn’t making any sense, and I didn’t hesitate to tell her so. “What in the gods name are you talking about!?”

“Ah yes,” the girl nodded eagerly, “In the Gods name! That’s exactly what I’m talking about.  I’m the envoy, and you’re the Determinant.”

“Well, honestly,” replied Arkey, “They’re not really trying to kill me… just you.”

I stared at her, wide eyed.

She considered my expression, thinking for a moment, “Okay, that was probably not the best thing to say just now.  But I wouldn’t worry about it.”

The girl clicked her tongue, disapprovingly, “You’re not being constructive.”

“I’m… I’m Not being constructive?! I’m trying not to be murdered right now!  Constructivism is going to be taking a back seat for the foreseeable future!”

Arkey considered this a moment, “Okay, fair point,” she admitted.  “Smell this,” she added quickly, holding something towards my face.

Whatever she had put in my face got right up my nose and I sneezed surely loud enough to bring my pursuers down upon me.

Yet when I opened my eyes, gone were the dank and dusty slums, and gone were the streets I called home.  I was in a field, full of dandelions, and a hundred other kinds of flowers that I didn’t know the names for.

The girl was there too, but she looked different.  Out of focus somehow.

“So I’m Arkey.” She said, again, “I’m the envoy. You’re the Determinant. Got it?” she sounded a lot older now, somehow.

I didn’t have an immediate response coming.  I had to collect my jaw from off the ground first.

I wasn’t having a very good time wrapping my head around what was going on.  What had happened, where was I, what did any of it mean?

After a while, I could feel her staring at me with those intense violet eyes, and I felt compelled to speak.

“Why me?” was all I could think of to say, “I’m nobody… I’m just some average… below average guy.  Some bum down off the streets. I can’t even work anymore, with just one arm. I don’t matter at all.”

Arkey shook her head, “It’s exactly because you’re nobody that you matter so much.  When the time comes to make the choice, it has to be made by someone with nothing to lose, with nothing to gain.  The Determinant has to be someone who has seen what joy and cruelty the world has to offer.”

“Who were those men?” I said, scrambling to assemble my thoughts, “Why are they after me?”

“They don’t like to play by the rules,” Arkey said, “They aren’t very keen on what we do, you see.  So they like to try and kill the Determinant, before the choice is made.  We only do this thing once every aeon or so, but they always seem to turn up. Sometimes they're even successful.”

My face was ashen.

"Oh relax, they won't find you here." she reassured me.

“Tell me about your arm.” Arkey interrupted.

I glanced at the stump, the question was one I’d answered a million times to a million people, but still it bothered me. “Lost it in a fight,” was my standard answer.

“I KNOW that,” chided Arkey, as if it were the most obvious thing in the world, “But tell me what it MEANS to you?”

Now there was a question nobody had ever bothered to ask me.  Does it hurt? Can you still do stuff? How did you lose it? Did you get the other guy as good as he got you?  Sure those questions were common enough, but ‘what does it Mean to me?’  The question itself hardly seemed to make sense.

I’d lost the arm protecting someone I cared for very much.  She’d cared for me too, at the time.  But not for long afterwards.  In the end, she was disgusted by it.  Disgusted by me, and had no trouble saying so.

It was simply unfair. In what world do you sacrifice a part of yourself for someone, and they only end up despising you for it?

“I… I’m sorry I didn’t realize I was reminiscing out loud,” I said, feeling embarrassed.

“You weren’t,” responded the girl, quickly, “So, are you ready to make the choice?”

This girl.  This Arkey.  This envoy.  She was in my head… or I was in hers.  And the choice she wanted me to make was insane.

“I’m to choose whether this whole planet…”

“Lives or dies, yes.” Arkey finished my sentence, “That's the gist of it anyways.”

“And you’ve done this before?  You’ve actually find someone crazy enough to choose destruction?”

Arkey smiled, “I guess you’ve made your choice. I like you.” she said, “But yeah, sometimes that is what happens…and sometimes...

...Sometimes even a broken world gets a second chance.”