Regarding world design - Things to avoid!

ArchivedUser Guest
August 2017 edited August 2017 in Ashes of Creation Design
While i'm rather excited for the game, the videos have had me do a few double takes, especially where the world/level design is concerned. I hope what was shown so far were environment tests and blockouts/art tests rather than finalized designs, as it all looked incredibly flat and boxy.

So, i wanted to put some suggestions/ideas on paper. I don't want to sound arrogant or whatever, but i think that these suggestions can make the world feel like a much more believable place.

A mistake i often see made in MMO's is that the designers overestimate the amount of space a player character needs to move around in comfortably, and they overestimate it greatly. What you end up with are "cities" where buildings are, so to speak, miles apart and streets/roads look more like 16-lane highways instead of well-used, single track midieval paths. Everything else is massively oversized, to the point where small, low income housing looks the size of a large noble family's mansion. One game in particular which falls into this trap is WoW:

Note how diminuitive human-sized characters are in this space. Even in the context of that particular spot, it's ridiculous, especially when you realize that the entirety of Stormwind has at most about 20 or 30 houses where people might actually live (though only one or two of those can actually be entered).

Even singleplayer games fall prey to this overcompensation, like Whiterun in Skyrim:

Note the tiny human figure at the top of the stairs, in front of the hall.

Not only is this kind of city design unimmersive at best, it's also wasteful. It creates the wrong illusion of space in an already scaled down world.

Another issue which is created by this design is also evident in both examples. Because the towns have such a large footprint but comparatively few (oversized) buildings, the population is necessarily small. Even though you have this large space, there's nothing in it! This makes designs like these feel like ghosttowns.

Another game which actually gets this right (at least, not as bad as most others) is Black Desert. For all the (serious) faults that game has, world and level design are not part of it.

This is one of the main streets in the game's capital city:

Look at how dense it is, how everything seems to be sized correctly. How alive just the screenshot feels compared to the others i posted earlier.

For comparison, this is the widest, largests 'street' in the city:

And even that has been spaced fairly well. There's obviously room for improvement, but it's much closer to a believable city than either Skyrim or WoW, or most other games actually.

I hear Witcher 3 has similar believable designs, but as i have not (yet) played the game i didn't want to include it here (no experience with how the spacing feels).

Another thing to note is how BDO uses verticalty quite well in its town/city designs, something which is noticably absent or lacking in WoW or Skyrim (when sticking to the earlier mentioned examples). Even Thunder Bluff, a city on mesa rocks high up, actually has a completely flat layout. It's utterly boring to nagivate and feels even less alive than any other town in the game. Solitude, Windhelm and Markarth are decent in Skyrim, but still suffer from some 'oversizing' issues and the lack of a believable population for the cities' in-world and in-lore sizes.

I hope this point is fairly clear though. The same applies to forests. Take Elwynn in WoW as an example:

This is a typical MMO forest. big trees, wide canopies but most importantly, absolutely *massive* spaces in between the trees. It feels less like a forest and more like an open field with twigs in it somehow.

While BDO also misses a step here it's still a big improvement:

Trees are realistically sized, even though they are spaced quite far apart still. However, it instantly feels far more believable than what WoW (or similar games) offer, simply due to an increased density. From the videos i've seen for Ashes though, that seems to already be fairly well done (but improvement is needed!).

The same goes for housing by the way. To the designers: Resist the urge to make interiors massive, empty, soulless hallways!

This lies very close to the concept of density, but warrants its own mention. A lot of game towns and cities have very simple layouts, usually quadratic/rectangular or circular in design. A major error most designers make here is that they design the city first and the landscape in which the city rests second, and i see hints that AoC is poised to repeat this mistake, with cities and towns being designed as templates to be placed on specific, flat spots designed to hold these templates.

Divinity's Reach in GW2 is a good example of this:

The extremely "gamey" design of the city is immediately obvious. It also suffers from some oversizing issues as well.

Instead, towns need to be designed AFTER the landscape is already there. Streets and buildings have to follow the lay of the land naturally and organically. Inclines, vertical differences, the location of the main road and, if the town has walls, the main gates. Where would people naturally congregate and gather? What would the main thoroughfares be? Where would the higher-off and lowborn citizens live? How large can the town be if it has to be supported by the land surrounding it?

A classic mistake a lot of designers also make is to make a walled city with very little housing or buildings outside of them, if any at all. They forget that city walls are purely for defensive purposes of the 'old' city, they don't prevent further growth. There's a lot of European cities with various city wall remnants within the old towns. Some cities in the Netherlands use canal systems for that in conjunction to walls. Amsterdam's layout shows this quite well:

Note the multitude of canals which denote the expansion of the city over the first 100-200 years of its existence. The old walls have been completely torn down over time of course.

This throws up new questions: How long has the town existed, for example. For new node towns this is less of an issue, but this line of thinking can be used for growing towns from one level to another for example, with old walls becoming redunant, but still part of the town's layout and design.

3) The geography as a whole

Another thing which is often forgotten by world/level designers is the overall geography of the game world. Many games simply flat-out ignore this part. Rivers flow upstream into an "ocean" the size of a duckpond, with nowhere else for the water to go. Mountains are just strips of land raised from the ground level, acting as extremely artificial barriers between zones.

While not an "official" game, the Skyrim mod Falskaar illustrates this problem perfectly:

Note how the "mountains" act as little more than fancy fences around the area, but aren't an actual geographic feature of the landscape. There's no faultlines or tectonic activity which could explain that particular placement.

Note the complete absence of a river spring or delta. The river is one, unbroken strip of almost exactly the same width along its entire length.

Note how the flora and fauna completely ignores elevation. Wind direction, mountain height and the likes have a big influence on what grows where, with the north side of tall mountains or mountain ranges usually having far less vegetation and wildlife than the south, generally speaking, just like moss generally grows on the north side of trees.

While the mod itself is excellent, the world design is plain awful, there is no question about this.

This point flows from the previous one, but needed to be mentioned seperately.

Another major mistake often made by other games is that their designers usually have a checklist of different biomes that need to be present. The desert, the snowy region, the forest, the grasslands, whatever.

In that, they completely forget where and how these biomes are and exist. Snow only happens in regions where it's cold, usually at higher altitudes or towards the poles of the planet. Deserts happen in areas where rain can't reach, like an extremely high plateau such as the Atacama or the Sahara, where the major ocean currents from the Indian and Atlantic oceans basically cause rainclouds to move around it rather than over it.

Transitions are also important. Sand deserts don't transition into snowy mountains within a few meters of each other, there's entire biomes between them. The sahara first transitions into an open steppe before it moves into a thin forest, and then a rain forest, and this happens over hundreds of kilometers.

Too many games forget about this. A prime example is WoW (again):

Note the harsh transitions between each zone. Even to this day, stepping from one zone into the next can give you visual whiplash.

BDO is one of the few games to approach this the correct way: 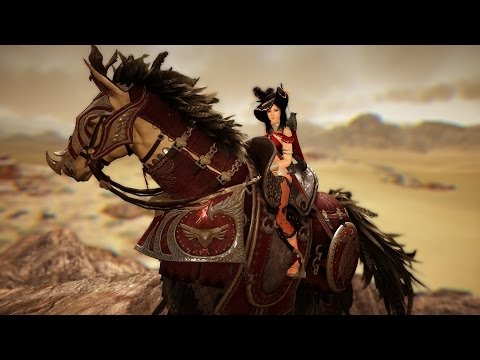 As you can see, the transition between zones is barely noticable, even at this speed.


The above 4 'issues' should be avoided as much as possible by the AoC designers to be able to create a proper, immersive world. Make the game feel less like a game and more like an actual, lived in world.

I realize that "MUH IMMERSION" is rather low on the wishlist of many players, but honestly, good world design can enhance a game to the nth degree - And good world design cannot be done after the fact. This has to be dealt with before the game world gets too locked in, design wise.
0