The New Bar which needs to be met regarding Combat/movement Animations &amp; Graphics.

ArchivedUser Guest
September 2018 edited September 2018 in Ashes of Creation Design
First let me preface this with the reason I am posting this is because I desperately want a well designed Non P2W, in depth PvP MMO to come along to save the genre... not to be a critical jerk. I'm really hoping that Ashes of Creation will be that game as it's the closest I've seen and because Steven, an ArcheAge veteran is behind the wheel.

That being said it's becoming clear that Movement/Combat Animation and graphcis quality are starting to be 2 of the most important things a game can have now.  The prime example/reason for this is Black Desert going Full Pay 2 Win during their NA/EU "Remaster" launch yet their daily active players have gone up vs gone down.

What's funny about this is that at least in my opinion Black desert really only does 2 things better than any other MMO out there... And that is their Graphics and combat system (not to be confused with PvP balance. or fun PvE... just the combat animations and input key combos used to fire off skills.) You maybe can throw in their node empire system as an honorable mention but other MMOs such as ArcheAge, ESO, Dark Age of Camalot, WoW and many others, offer much more in depth/well crafted Story, questing, PvE, PvP, Lifeskill and Crafting experiences.... You take away Black desert's combat and Graphics and you have an incredibly shallow MMO that would be as dead as the Bless servers without them.

Just like most guys can't take their eyes off the hottest girl in the bar even though she might have a vapid personality, likewise players are entranced by good graphics and good combat.

I'm writing this because I just saw the latest Action Combat video and while it was a big improvement from the previous tab target only system I think it has little a ways to go.  Right now Ashes of Creation's Combat and graphics seems like it is halfway between ESO and BDO's Graphics and combat... which is pretty good and definitely a HUGE improvement. So credit where credit is due AoC seems to be listening to the what the players want, But I fear that it may not be enough to take out BDO.... and I kinda want that to happen after being jebaited into another P2W game.

I feel AoC is not too far off the mark tho. The graphics are pretty good but still look slightly cartoonish similar to ESO in some instances and needs to be a little bit more realistic.  The movement of characters looks great in some instances but then slows down and looks a bit blocky or exagerated others... again similar to ESO's.

The reason for this I think is something I like to call "Shoulder Lock" and "Turret Torso". Basically they lock they camera to the shoulders of the character and their torso remains completely straight and upright and move completely independently from the waist/legs.  Both of these things combined make the character look Stiff and robotic as well as appearing to "float" as they move.

Here is an example of "Turret Torso": 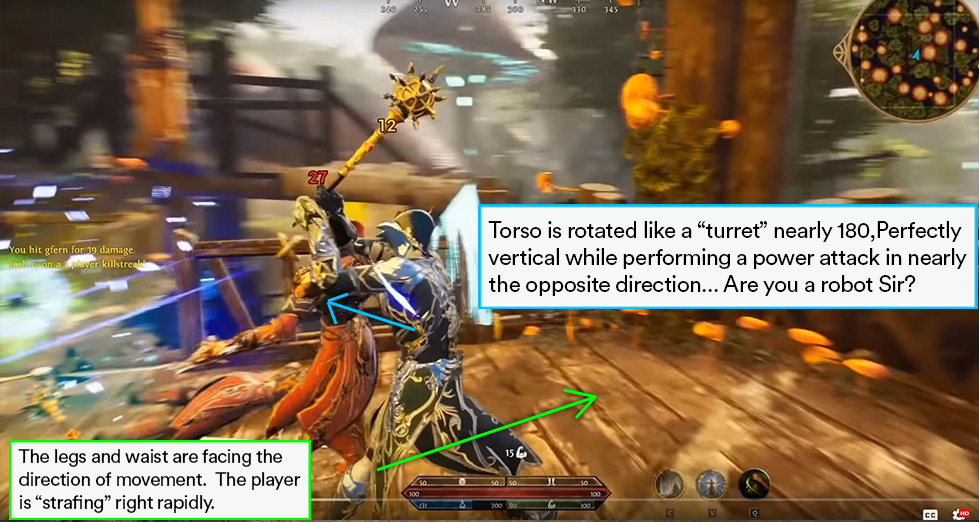 Shoulder lock is much more hard to depict in images but here is a shot of a player strafing fairly quickly while their entire body is upright. Again feet move in any direction while shoulders and torso are locked perfectly still. 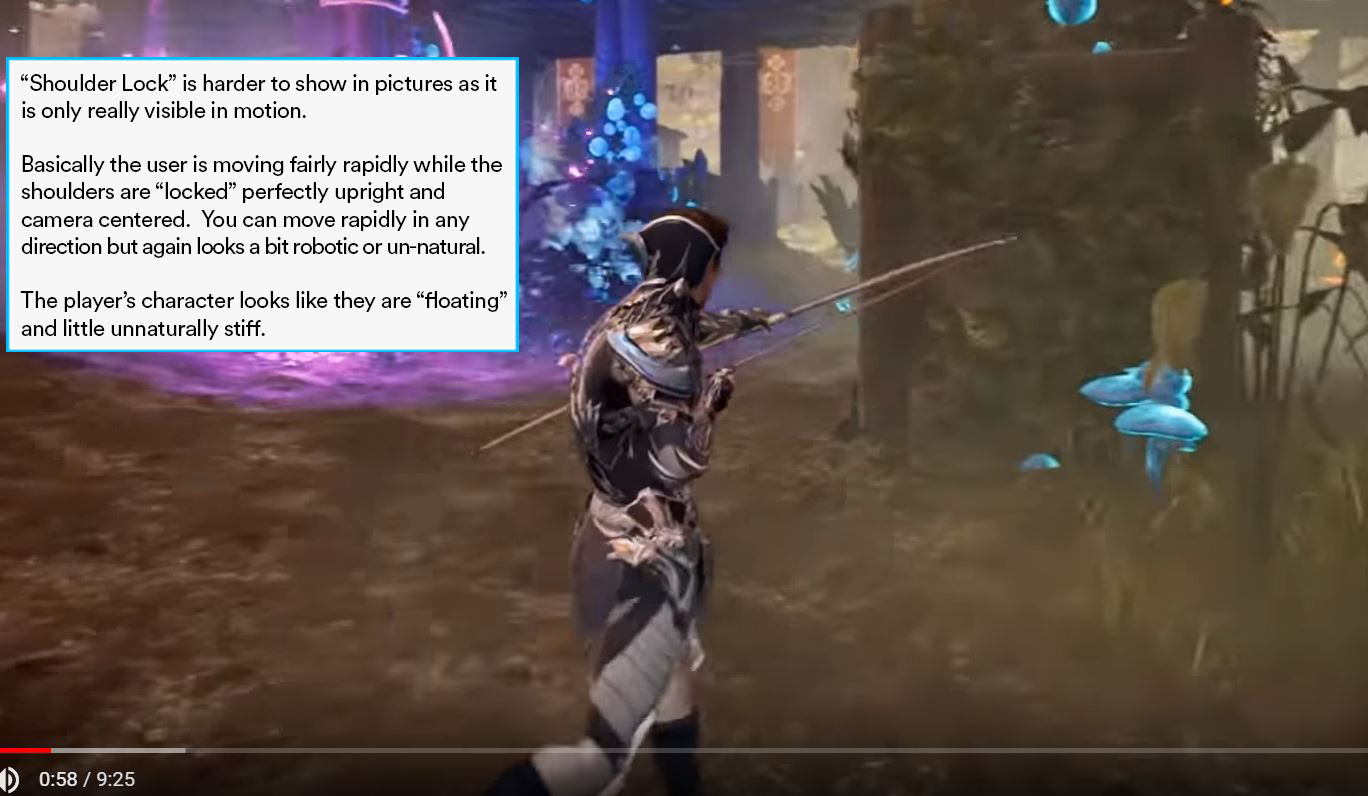 Compare this with BDO which has separate animations for sideways movement and don't lock the camera to the shoulders:
Ranger moving bow shot (notice torso matches direction of movement): 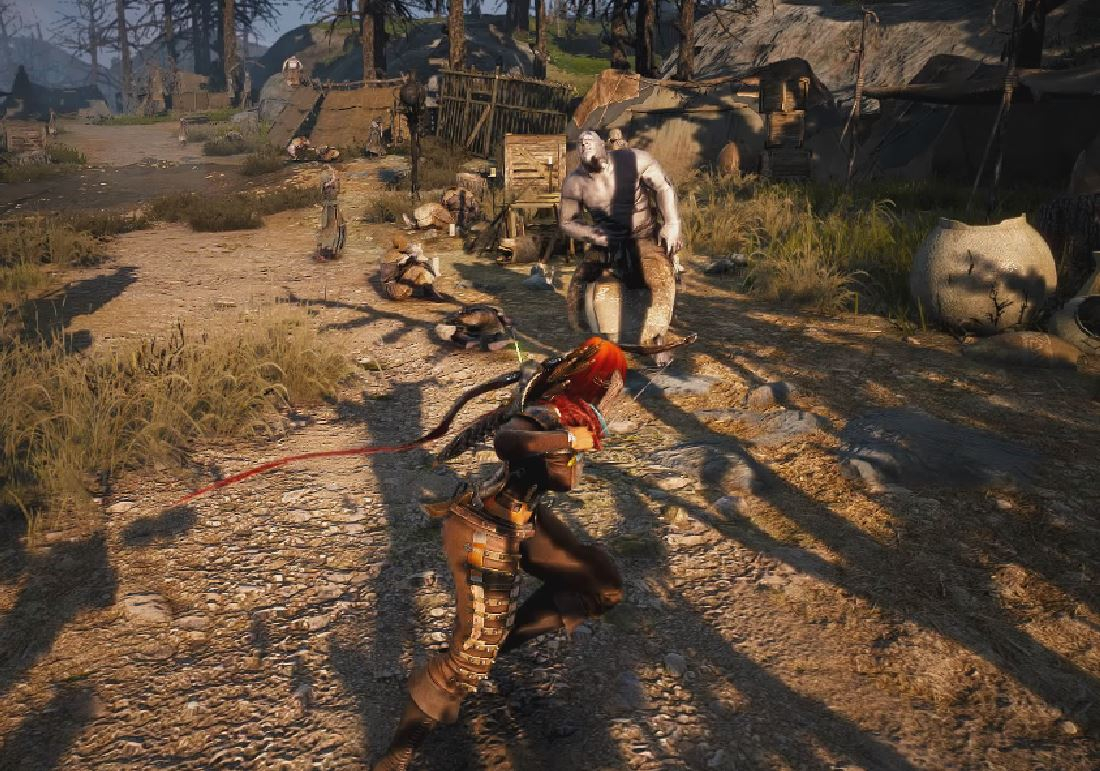 Warrior side strafing attack (notice his whole body moves with the attack due to the weight of the weapon): 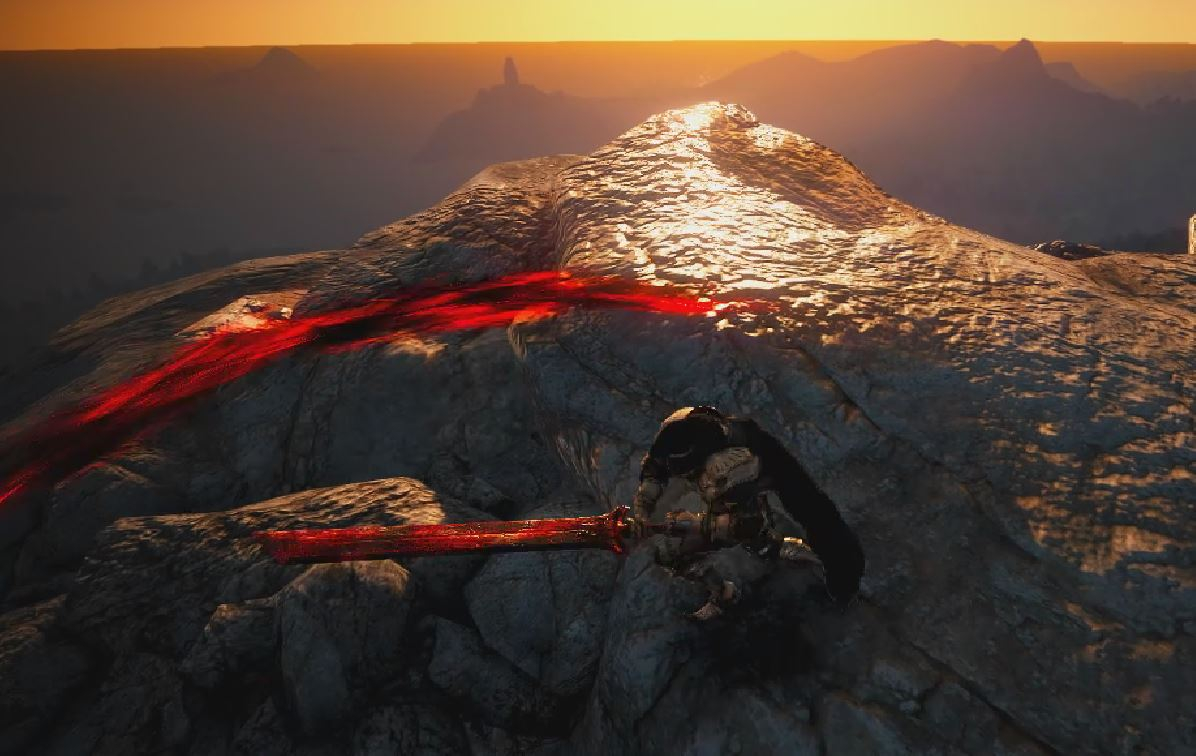 Now a lot of AoC's animations are pretty good.  The blink skill, dodge rolls and dash attack skills looked great but it was harshly contrasted by slow or awkward looking shoulder locked/turret torso ranged & melee skills.  The other issue I saw with melee skills were slow and ponderous swings... like there a guy was swinging a staff around and besides suffering from "turret torso" it looked like it had the weight of a 20lb sledgehammer vs a thin dowel of wood.  Yet the next swing it was lightning fast... so again very strange inconsistancy there.  The wand animation just looked weird like I should be saying "Expecto Patronus!" or something every time I swing it lol.  It was very harry potter and it just looked weird seeing a muscular character waive a wand around like that... While some people might not have issue with it I feel a significant amount of players might shy away from using skills that require a wand because of it. Maybe a staff or scepter or skyrim style spells in hand would be better?.  The bow was pretty good in most instances as far as single shots went.... I think what I saw was great for basic or sniping attacks but again it still suffers from shoulder lock and a bit of turret torso.

I recommend the animators and devs take an analytical look at BDO's combat input system and movement animations to see how they can make AOC's animation realistic yet fantasy and stylish at the same time and ditch that dated "shoulder lock" and "Turret Torso" look.  I'm not sure if intrepid is leveraging motion capture for animations or not but I know that BDO used quite a bit of Mo-Cap + martial artists to do the heavy lifting on most of those animations. They also used separate animations for various sideways movement and attack skills.  I feel AoC's animations could be considerably improved if they follow a similar model.

Considering the competitive and critical nature of the market, I feel to be relevant in 2020 the graphics and animation quality need to match a certain benchmark and right now BDO holds the highest benchmark in that respect and I feel/fear that benchmark is going to become the new expectation of many players. Black Desert has proven you can have Crap content but if the world is dazzling and the combat is fluid, sexy, engaging and addictive; then people will still play that game for years and spend hundreds to thousands of dollars on it.

That being said I feel AOC can make a better combat system by combining the animation quality and fluidity of BDO's style of combat with judicious skill cooldowns, CC breaks and separation of skills so that CC, Buffs, heals and DPS are separate skills.  The combat preview definitely showed that much of this is already in play and I'm excited to see where it ends up!

Also I feel You can have both tab targeting + free aim action combat  in the same combat system in a fairly seemless manner.  BDO for instance had a hotbar which you could slot nearly any skill into and either fire it off with the action combat key combo input or by using the hotkey.  I feel AoC could use a similar system but simply have 3-4 Hotbars just like ArcheAge had.

You can also have both tab target and action combat at the same time.  Basically you default free look and aim just like in BDO but you can hit tab to snap your focus to a specifc target and keep hitting tab to cycle through targets.   You can also have the option to have a temporary dark souls style "soft lock on" mechanic which you could bind to a 3rd mouse button or other custom modifier key for action combat players to use to focus targets.

Again I am not being this critical to be insensitive or insulting but rather because I believe in the great potential of Ashes of Creation and I want it to be the best MMO ever made.
0
«12»