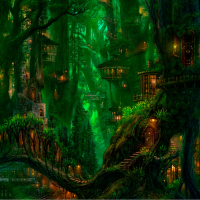 eragale Member, Braver of Worlds
June 2019 in General Discussion
So I know i made a post about this a while back in the old forums ( the 2nd Version ). But seeing as though its now all wiped ... i might as well start things off with this Class.

While i do like the idea of Archetypes and there being Primary Archetype & Secondary Archetype ... some of the designs for these classes had me curious - I'm curious what is Intrepid's version of the Summoner will be " feel " like.

Of the 8 Archetypes ( or classes ), the Top 3 classes that troubles me are ... Summoner, Bard and Ranger

When compared to current MMORPGs, nearly every player has the exact same summoned-creature ( or pet ) and thus .. there's no diversity for this class. Why is it that every Summoner has the exact same " pet " in every MMORPG? Imo, it just makes the class bland. In my old post, I was very thorough in my points .. but I'm not even sure what Intrepid will do.

So its hard to truly say anything about it ( or any of the other Archetypes) until things progress further.

So what do you think?