[Scenario] Traveling Through the Gateway 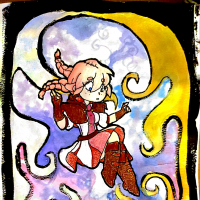 themeanbunny Member
August 2019 edited August 2019 in Role-Playing Tavern
Hi! So I had this thought the other day about what people would do upon returning to Verra and people suddenly having magic. I believe Sanctus was a world without any magic at all. I'm going to copy and paste my idea on "portal sickness" here just in case anyone else would like to imagine what it might be like for your character to just enter Verra.

(Even though we don't have a whole lot to go off of, just thinking about it sounds fun. Feel free to write up a story post about this scenario! Beneath this is the post I made from the AoC Discord.)

"Portal Sickness: Certain people feel ill when crossing over because they're the ones with the capability of magic and it's sort of bubbling in their veins. (Though there could actually be portal/motion sickness without the magical powers)

I just wanna know how people reacted to some suddenly having strange abilities if they've all come from somewhere without magic. First the things are a little small (sorta like how you can't do much at a low level, haha) -- blown off as tricks of the mind, that the person is just feverish. Then as a few days pass (the ill feeling some folks have starting to fade) and suddenly you have the first case of a potential Mage setting something ablaze by accident.

Or someone who was just a regular priest (who can become a Cleric) accidentally healing a wound closed when tending to an injured scout and everyone generally freaks out because wounds generally just don't close themselves after a flash of light.

(Or as I joked about earlier maybe a new Cleric who has been toying with their skills accidentally resurrects someone: "Theodore died this morning.. But I sneezed over his corpse and accidentally jolted him with some magic -- and by the gods he's moving again." -- Traumatized Cleric)"