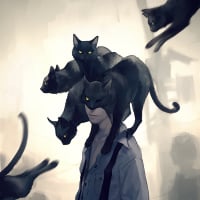 Hexcat Member
January 2020 in General Discussion
So, watching the latest livestream it comes to my attention that we will be able to put a "default" appearance for the other players and NPC so our potatoes can run smoothly during big sieges and battles, then i was watching, again, SAO. and this idea comes to my mind, just like the armies in LOTR or in some other fantasy themed movies, games, etc, would´t it be nice to give the guild the chance to have their own uniform, something like the tabard in wow but taking it to other level, to me sounds really cool if all the Verran Trading Company where using some kind of coat with the sigil or The Ashen Scythes wearing the same red and black armor (just to say some examples), of course all of this being something optional for the members