Can crafters name the legendary items they craft? 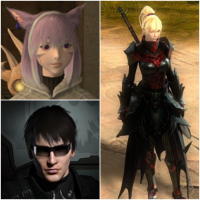 Voidwalkers Member
October 15 edited October 15 in General Discussion
Say, in a usual mmo where most top tier gears are boss drops, it makes sense that the boss suddenly drops a sword named Excalibur. But it seems weird to me that a crafter would discover a "recipe of Excalibur" and be able to churn out as many excaliburs as he wants (as long as he has the legendary mats).

Instead it seems more natural to me that the weaponsmith would acquire a "recipe of legendary elemental long sword", throw in the right materials and craft a "legendary holy long sword", and name it Excalibur or Durendal or Kusanagi or Grasscutter or Occam's Razor upon completion.

Judging from the wiki https://ashesofcreation.wiki/Legendary, my guess is legendary items would be extremely rare, and hopefully we won't run into an "everybody's trying to name the sword they craft Excalibur" problem.

Not sure whether this would be hard to implement, and whether it's even worth implementing. Just thought it would be a cool idea. Thoughts?
1