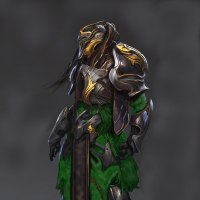 Ralizek Member, Braver of Worlds
April 6 in General Discussion
Had an idea I wanted to bounce around.
What do you think about being able to hang tattered guild banners for guilds you've defeated?
For instance let's say guild leaders have a torn banner they drop when you kill a guild leader.
Then you could hang a bunch of tattered banners on your freehold or guild hall, sorta like badges of honor.
maybe guilds can get something if they can take back their flag by destroying your guild hall or freehold. Maybe if two opposing guilds both have each others torn bankers they can parlay and trade them back. Possibly even turn them in to an NPC of a node for some boosted defenses or node Xp.
6