Home› Archived Posts› Ashes of Creation Systems and Mechanics
Greetings, glorious adventurers! If you're joining in our Alpha One spot testing, please follow the steps here to see all the latest test info on our forums and Discord!

ArchivedUser Guest
September 2017 in Ashes of Creation Systems and Mechanics
Hi all,

I know this has probably been discussed a good amount (if not, I would love to get the ball rolling!), but it is an aspect of MMOs that I fell in love with.

First off, I am a longtime member of the EverQuest and Star Wars Galaxies communities so it is an understatement to say that I am excited for AOC to come into alpha at the end of 2017! Over the years I have played in tons of different MMOs with anything from Wildstar, ESO, Tera, to Everquest, WoW, SWTOR, GW2. I waited years for EverQuest Next to come out and almost shit my pants when I began to see bits and pieces coming along, but as Murphy's Law states "Anything that can go wrong will go wrong." EverQuest Next was discontinued in 2016 with the developers stating "it just wasn't fun anymore" which to me was extremely upsetting as diehard fans have waited for the next installment for ages. All in all, I have not stopped watching and lurking in the forums since the game was first announced months ago so lets get to business!

If any of you have played EverQuest or SWG you have encountered static housing on an advanced level to the point where decorating was an actual "job" in the game. I would spend countless hours for friends and clients working on decorating a house with a budget that was set by them only to find myself immersed into the game that I would be thinking about what type of tapestry to hang while I laid in bed at night.

From decorating basic housing (simple houses with 2-3 rooms) to prestigious housing (basically mansions with multiple floors and 2 rooms on each) I never seemed to have a dull moment while taking my planned break from questing or plowing through dungeons with my guild. Not only was this just a leisure activity, but it gave way into sales too as in EverQuest one of the most important aspects was that if you wanted to purchase an item that was very expensive you would take the time to go to the seller's home and purchase it from a sales display as you cut out the broker fee's. There are so many aspects that I would love to see in AOC that would just make me love the game even more because I always believed that there are specific areas that developers could spend more time on and it connect with a large player base. Are there any specific aspects of housing that you have seen on other games? (EVE online, FF, Wildstar to spark ideas)

I won't touch long on the crafting system, but there is one aspect that I believed EverQuest hit on when selecting a profession. There is a tradeskilling system when crafting specific items that is literally like your hotbar for combat, but these abilities add to both the progress and the durability of your item. The goal was to fill the progress bar faster than the durability bar was degrading (although if you let the durability bar go below certain marks then the quality would decrease). In the picture below, you can see that there are six abilities with some increasing your progress while sacrificing durability and vice versa. While tradeskilling, there would be crafting events that would call for you to hit a specific ability in certain time frame which would be crucial to gaining control over your two bars. This was quite possibly one of the biggest reasons tradeskilling was so much fun and felt like when you asked someone to craft you a set of Mastercrafter armor it would take such skill and time to make sure that the quality of the armor was the best.

Also, hierarchical style of classes allowed for the best way to understand which type of profession you wanted to do.
Artisan: levels 2-9; dabble in all different types of professions
Class: levels 10-19; Craftsmen, Outfitter or scholar
Subclass: At level 19 you must choose a subclass of the class you chose at level 10 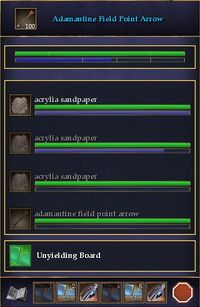 Some websites detailing what you were capable of designing
http://www.eq2designgallery.com/

https://www.engadget.com/2011/12/09/some-assembly-required-swg-housing-extravaganza/#gallery=78359&slide=919960&index=0  (mind you that every piece of furniture seen is placed by the decorator so it's very impressive!)

The static housing in AOC should look at what was successful in other MMOs such as EQ2 and SWG. Crafting should be more than just a "gather materials, hit craft" so that there is more reward to spending your time on crafting.