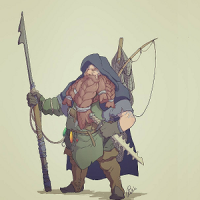 Morashtak Member, Braver of Worlds, Kickstarter, Alpha One
April 2019 edited April 2019 in Role-Playing Tavern
How does this guide help the non-role playing player?
Are you looking to make big bucks on the auction house or advertising in general or trade chat channel? Yes, role players (RPers) have been known to spend gold on a common item that unknowing players vendor (sell to NPCs) for a few copper. If you find yourself on a server that has a large RP community make sure not to vendor interesting looking clothing items or even weapons such as short staffs that can be used as walking sticks. Your trash is an RPers treasure.

This is why you'll see common items being offered for sale far above the price for a uncommon one. And if that so-called common item has an otherwise low drop rate then you might see the price rival the prices of rare items. You may find your bags full at times but eventually you will find it another easy way to make a few gold.


Now on to "What is Role Playing?"

Simply stated Role Playing (or "RP") is assuming another persona than the one that defines you as a real person. We know that Robert Downey Jr doesn't actually have a working Iron Man suit in his basement, its just part of his Tony Stark on-screen persona.

How does this work in an online game? Players can pull on the skin of the character they have created and fully flesh them out with their own phobias, likes, dislikes, skills, and many other preferences that the player would never have. Ex. A players' necromancer character might have a large spider collection while the player freaks out out the sight of any small, harmless spider.

How does a player new to RP start? Keep it simple - Look for small ways to join in as a "movie extra". One example is to find a group that RPs in a tavern and volunteer to be one of the wait staff. Then by listening and watching others you can see the players that are well practiced as well as others that need more polish.

What should a new player watch out for? Avoid those that describe themselves as "1/2 dragon-kin, 1/2 vampire, 1/2 werewolf, 1/2 elf, 1/2 orc, and 1/16th Cherokee!". The better RPers will keep it simple and stick to a narrow script; easy to remember backstory, no super powers, and an easy to believe persona.

Some games give players a text block that they can type in a backstory which other players can mouse over this box and read it. Too often a player will end up typing in a wall of text that immediately puts off the reader. Again, keep it simple. Also a little secrecy and room to improvise can keep from pigeon-holing the character.

Should IS give us this tool then three quick bullet points is all it should take to give the first general impression.


What do you do when you do find yourself in an RP situation?

When RP'ing or moving close to an RP event you'll see someone type in chat something like this;
"Have at you, you coward! <Steven draws his sword and swings it at Jeffrey> (my character doesn't know how to use a sword very well)". Note: All these parts are optional according to what is needed. Also some players may use other brackets in place of those in the example. Pay attention to the context and it should be clear on what is meant.

Note: It would be incorrect to add "inexpertly" to the second section as that would "force" everyone involved to know the difference between amateur and expert sword play.

Keeping the action section vague while explaining in the OOC section allows a wide variety of RP reactions.

Examples; Once one player has described their action other players can react to it using any or all of the three sections. Keep responses within the boundaries of the event as well pertinent to the immediate actions and reactions.


What do you not do?

If the RP has been lightly scripted and the necromancer character is going to sacrifice another player for some nefarious purpose then we have the basis for good RP and controlling of another player. Simply walking into a tavern and stating out of the blue "Everybody is now frozen in place" is likely to get one ignored.

Don't dominate the event - Keep your actions uncomplicated and clear - No walls of text unless it's called for. Something as long a Hamlet's First Soliloquy is good within context but dominating the RP event with huge tracts of text is going to get you ignored and not invited to any future events.

Don't God-Mode - Stay within what your character would know and not what you, the player, knows. You yourself may have heard about a magic item being found but would your character? Has the player that found the item been showing it off or have they kept it a secret from everyone but a few close friends? It can be a bit off-putting for RPers to hear about some artifact being found when in reality it was just shared two minutes ago on the forums and not widely known in the realm.

The same goes for stating that your character has powers that are not combat or non-combat skill related that defy rational (in-game) belief; impervious to otherwise death dealing effects (drowning, fire, lightning, etc), able to tear apart a dragon with their bare hands, as well as other nonsensical statements. Of course, should your character have slayed a dragon and there are witnesses to that event then feel free to play it up, or not, as part of your characters history.

Don't deliberately walk through an event. If you accidentally do quickly apologize.

"Do I have to play dress-up?" No. While it helps costumes are usually reserved for scripted events. A barmaid dressed in full plate might not be all that believable but most will overlook it during casual RP. The more serious RP guilds that put on scripted events will have RP clothes available for drop-in extras - Just ask in OOC "(do you need any wait staff?)" and you might find a trade window popping up with a full set of barmaids clothes being offered. Just remember your good manners and give it all back when you're ready to leave.

If you want to start dressing for the part ask around and see what cheap outfits are readily available. Tailors/Armor smiths/etc may be all but giving them away in their effort to level up their artisan skill (tho' they may ask you to supply the materials as well as a small tip/gratuity should you have a more uncommon request).

As a side note - For the experts as well as those that like to see the major effort that goes into making costumes it is not unheard of for a "fashion runway" event to be held for costumes. Players can be very creative and will put in many hours constructing that very special costume that defines their character.

Also, small to medium sized events may require you to be included in a raid group. Since it appears that AoC will have 40-person raid groups the RP events may keep general chat clean by joining up in a group and using the raid chat channel.

Note to the devs; Would like to be able to create a unique channel (i.e. "/makechannel RPevent" ) for limited time use.

Have fun without being "too out there". Again, keep it simple. Light-hearted during happy events. Somber during somber events. Stay within the mood of the event.

Be respectful. Both to new players as well as players that are being trollish, obnoxious, or otherwise harassing. If you don't feel like RP'ing walk away. No one can make anyone RP or even stop, tho' sometimes its best to call a halt until a ticket can be submitted and the harassing individuals get a time out.

Don't be afraid. The RP community loves it when players participate in even the smallest ways - A vendor that is willing to haggle, a tavern owner taking pride in the special-of-the-day, a ranger adding a bit of flair when tracking. These are just a few of the small ways that can liven up an otherwise dull slog to the dungeon.


Information sources; Specifically; A longer guide; There are many other guides (search "how to rp online") but they are specific to each game. While generally helpful the specifics may not apply to RP'ing in AoC.