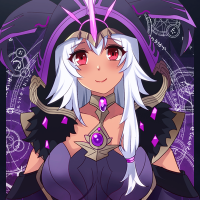 I hope i placed this in the right place. Personally i am curious if there is at any point going to be a preview of what that angel and demon racial skin some of the kickstart packs mention looks like.